When developing test systems for innovative products, the time required from design to the finished test system must be as short as possible. In the current test requirements for electric motors, a large number of measured variables are necessary for their characterization, which must be recorded with maximum synchronization to each other. In cooperation with Gantner Instruments, NCTE has developed a technological solution that uses proven standard components, so-called COTS (components-off-the-shelf). This allows measurement tasks to be solved ad hoc – saving valuable time. Developers can use this time for the actual task: performing the tests and evaluating the data.

When measuring torque on a rotational object, it is important that there is no interference due to the measuring sensor itself. It must be ensured that the correct quantities are measured and then correctly recorded with suitable hardware. The measured value is affected by a sum of different error sources that influence the actual signal to be measured. These include the accuracy of the sensor and of the measured value acquisition, but also interfaces, connecting cables and external influences.

When planning and implementing a test system, it is therefore first necessary to determine what is to be measured and the quality of the measured values that should subsequently be available. It is not uncommon that the requirements and the resulting costs do not correlate with each other. To establish this correlation, the use of COTS components is inevitable.

Torque and speed at a test station for electric motors

At a test station for electric motors, electrical and mechanical variables are recorded. These are voltage and current at the DC motor as well as torque and speed. If required, the measurement data can be expanded with physical variables such as temperature, vibration or strain at any time and recorded highly synchronously. Hardware and software from Gantner Instruments were selected for the measurement data acquisition as well as the visualization of the test bench. The decisive process variables torque and speed are recorded by a sensor from NCTE. The advantages of the NCTE sensor: It measures speed and torque without contact, which reduces the input of disturbance variables by mechanical parts – as they are used with conventional sensors. 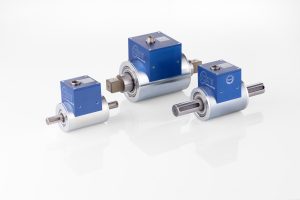 The test setup consists of an electric motor loaded by a hydraulic brake. The shaft connecting the motor and the brake is equipped with the NCTE sensor. The non-contact sensor detects the change in the magnetic field and converts it into a measurable analog signal for speed and torque.

The braking force is adjusted via an electrohydraulic disc brake using a dashboard. If the braking force is increased, the speed decreases. In response, a higher motor current is set, which increases the power of the DC motor and brings the actual speed closer to the target speed again. Here, the controller becomes an embedded edge device with PAC functionality. For simpler applications, where a controller without further control tasks is sufficient, the PID function can be selected among the virtual variables of the controller. In this test setup, one was used for speed control. 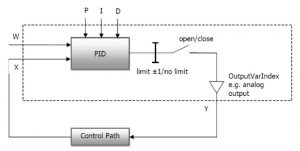 The acquired signals can be scaled and zeroed on the measuring modules. In addition, a variety of other arithmetic functions can be created using virtual variables. For example, to calculate the active power P from the measured voltage and current values.

With a measurement accuracy of the non-contact sensor of up to ±0.1% and the measurement technology of typically ±0.01%, this results in an overall accuracy of approximately ±0.1%. The accuracy in combination with the high measuring ranges for speed and torque allow a quick ad hoc setup of the test system and a fast acquisition of the measurement data.

The technology behind non-contact measurement

In a magnetization process patented by NCTE, the shaft itself, through magnetic encoding, becomes the “transmitter” of a sensor. A “receiver” detects the magnetic field changes without contact and evaluates them at a distance of a few millimeters – even through dirt or lubricants and at the highest speeds.

The measuring principle is based on the effect of inverse magnetostriction. This is based on the fact that the magnetic field of an object changes as a result of mechanical forces acting on it.

If an object is magnetized, this leads to a distortion of the crystal lattice and to magnetostrictive deformation. Conversely, this effect can be used by measuring the change in magnetization that occurs due to a mechanical load in a suitably magnetized material. If an external force is applied to the shaft, then the direction of the previously applied magnetization changes. This effect is called inverse magnetostriction and forms the basis of NCTE’s measurement principle. The magnetic field is circular and always finds its way back to its original orientation after deformation or vibration.

Functional principle of the sensor

Due to the non-contact measurement, there is no need for cables or strain gauges. The magnetic coding is long-term stable and no wear occurs. This makes the magnetic field measurement maintenance-free. Torque measurement can continue even under overload conditions and the sensors provide precise readings even in difficult environmental conditions. Even strong vibrations, oil and water, and high temperatures do not affect operation.

Since its founding in 1982, Gantner Instruments has been an international specialist in distributed measurement and I/O systems as well as the measurement of mechanical, thermal and electrical quantities. The flexible measurement and control systems are designed for demanding test environments – such as engine testing, component testing, performance monitoring and long-term testing.